Hay fever is well known as seasonal allergic rhinitis. The symptoms include sneezing, a runny nose and itchy eyes. The condition affects 20% of adults in the UK and seems to become more common in the children.

If you’re allergic to pollen from grasses, weeds or trees, moulds carried in the air, during the spring and summer it means that you’re prone to hay fever.

These plants and moulds produce allergens – substances that can cause an allergic reaction. When your body’s immune system reacts to an allergen, for example pollen, an allergic reaction happens, because it mistakes for a virus kind of invader. The result of your immune system overreacting to pollen allergens leads to hay fever, that are airborne during spring and summer and which are less harmful to most people.

The tendency to develop hay fever (allergic rhinitis), food allergy and eczema which are related allergic conditions, seems to run in families. This is called atopy. This means antibodies are produced in response to allergens in allergic people, while it’s not in non-allergic people.

One can have one or more of the following as a range of symptoms. These include

Symptoms that sometime develop later include:

Other common physical symptoms (part of Late-Phase Symptoms) include a decreased sense of smell or taste, plugged ears, sinus headache, postnasal drip or some combination. 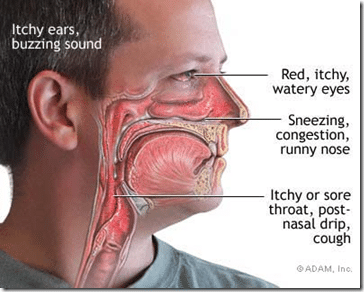 An allergic reaction may produce the same symptoms in response to harmless substances like dust, dander or pollen, just as to harmful substances such as bacteria, viruses and toxins by producing symptoms like runny nose and congestion, post-nasal drip and sore-throat, and itchy ears and eyes. The sensitized immune system produces antibodies which cause chemicals called histamines to be released into the bloodstream, causing itching, swelling of affected tissues, mucus production, hives, rashes, and other symptoms. Symptoms vary in severity from person to person.